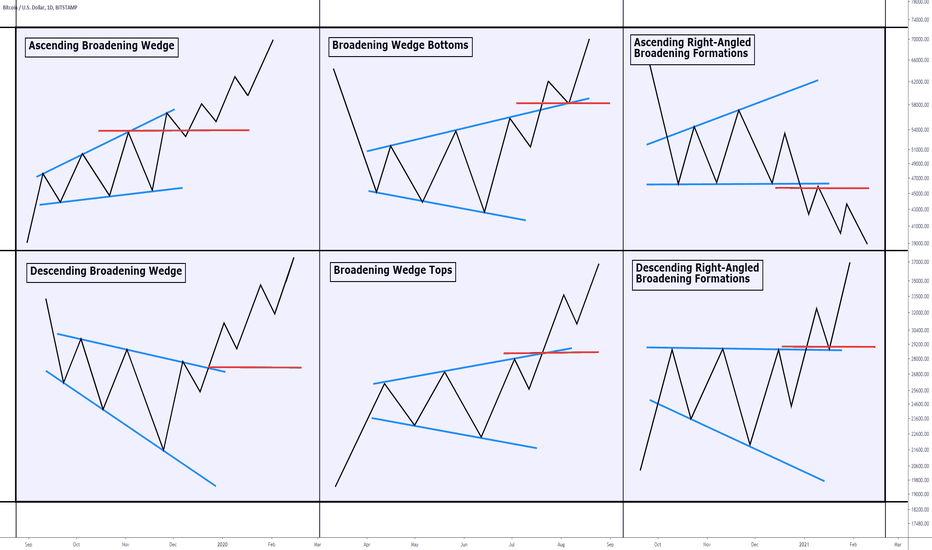 In this post, we perform an advanced analysis of broadening wedges patterns. We provide a description of each pattern and its implications. We also review the literature in order to find their deterministic cause.

Broadening wedges are characterized by price variations laying within one support and resistance , both having the same direction and broadening over time. As such the apex of the support/resistance in a broadening wedge is located to the left.

Broadening wedges must not be confused with other broadening formations. While they all have a broadening characteristic they can have different identification rules

Broadening wedges are classified depending on the direction of the support/resistance .

Bulkowski suggests the price needs to test the support and resistance three times each. Additionally, the resistance should be steeper than the support.

Volume tends to increase during the formation of such pattern.

Ascending broadening wedges have a bearish bias with breakouts mostly occurring downward. Downward breakouts are often followed by a decrease in price.

Similarly to ascending broadening wedges , Bulkowski suggests the price needs to test the support and resistance three times each. Additionally, the support should be steeper than the resistance.

Volume tends to increase during the formation of such pattern.

Descending broadening wedges have a bullish bias with breakouts mostly occurring upward. Upward breakouts are often followed by an increase in price.

Partial rises commonly occur in broadening ascending wedges , price bounces off the support, moves towards the resistance without reaching it, and go back to the support. We can expect a potential downward breakout after that. Note that a partial rise always starts from the test of the support.

Partial declines commonly occur in broadening descending wedges . The price bounces off the resistance, moves towards the support without reaching it, and then goes back to the resistance where we can expect a potential breakout upwards. Note that a partial decline always starts from the test of the resistance.

Partial rises and declines can offer a better price to buy/sell instead of waiting for a breakout.

The measure rule for broadening wedges allows us to determine the position of a take-profit/stop-loss.

For a broadening ascending wedge the measure rule would place our take profit at the lowest low inside the formation. Selling directly after a partial rise would allow for higher profits.

For a broadening descending wedge the measure rule would place our take profit at the highest high inside the formation. Selling directly after a partial decline would allow for higher profits.

Certain analysts close trades caused by partial rises/declines when the price reaches the support/resistance of the wedge , opening a new position in the case of a breakout while using the metric rule for setting their take profit.

Bulkowski offers a description of the causes of broadening wedges in the market in terms of the market participant’s behavior.

The cause of an ascending broadening wedge is a surge from an initial buying impulse, driving the price higher. Momentum traders follow the initial impulse further pushing prices up.

Contrarian traders judge the price to be trading above its intrinsic value, selling and thus creating a decline in prices. However, before the decline reaches the previously established low, certain market participants buy again. These participants can be composed of initial buyers, accumulating positions, or late traders seeing the potential to buy at a better price. This allows the creation of a new impulse, with only a divergence left.

This scenario eventually repeats itself with increased volume , causing impulses and retracements of higher magnitude reinforcing a positive feedback loop until the price is judged overbought even by initial buyers.

A broadening falling wedge follows the same scenario structure but with sellers instead of buyers.

The amplitude of the cyclical variations within a broadening wedge increases over time, thus potentially highlighting volatility clusters in higher time-frames.

In this post we described broadening wedge patterns in depth. We have highlighted partial rises/declines as well as how the measure rule applies to such patterns. We then focused on showing how market participants act during the formation of broadening wedges .

Note that unlike triangles patterns we did not find a significant number of studies mentioning such patterns, nor any agent models developed to describe their occurrence.

The first step to becoming a better trader is abandoning you own opinions, predictions, and emotions in favor of trading the price action itself. Uptrends, downtrends, and trading ranges on charts become more clear when all personal biases are removed.
ECONOMIC & FINANCE

A trading method is a specific process and theory for approaching the financial markets in an established way to make money. A trading method brings orderliness of thought and behavior for planning and implementing a trader’s action for the philosophy behind entries and exits.
Load more