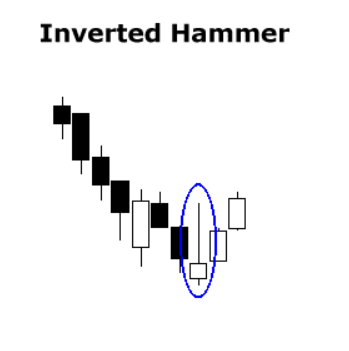 What is an Inverted Hammer Candlestick?

During a downtrend an inverted hammer price opens lower than the previous periods low. Then price trades higher creating a large candle wick inside the period being tracked and falls from the highs but still closes above the open, it finishes trading looking like a square upside-down hammer.

When the inverted hammer is formed during an uptrend in price it is called a shooting star this pattern forms in an uptrend and signals a high probability for a market top.

The large upper wick (shadow) of the candle shows that the buyers pushed prices up during the trading period of the candle’s formation but were met with selling at higher price levels which pushed the price back lower to closer to the open than the intra-day or period highs. Many traders wait and look for a higher open and close on the next candle of the timeframe to verify the validity of the bullish inverted hammer candle and increase the odds of success in buying the reversal from the lows.

With the inverted candle the context of its appearance is crucial as it can signal bearishness in an uptrend and bullishness in a downtrend. Even though they look the same commonly the pattern thought of as the inverted hammer is the bullish one that appears during downtrends while the bearish one is usually referred to as the shooting star.

The pin bar is a candlestick bar which is a very powerful formation if you use it correctly. You can catch significant market moves as this bar signals to take the trade from the beginning of the trend. We find these ideal pin bars when the market moves sharply and then dries the volatility or loses the strength of its trend.
CANDLESTICKS

Simple Ways to Use Candlestick Patterns

Candlestick Patterns are a type of chart that clearly represents the behavior of buyers and sellers through visual price action patterns. They are a very...
ECONOMIC & FINANCE