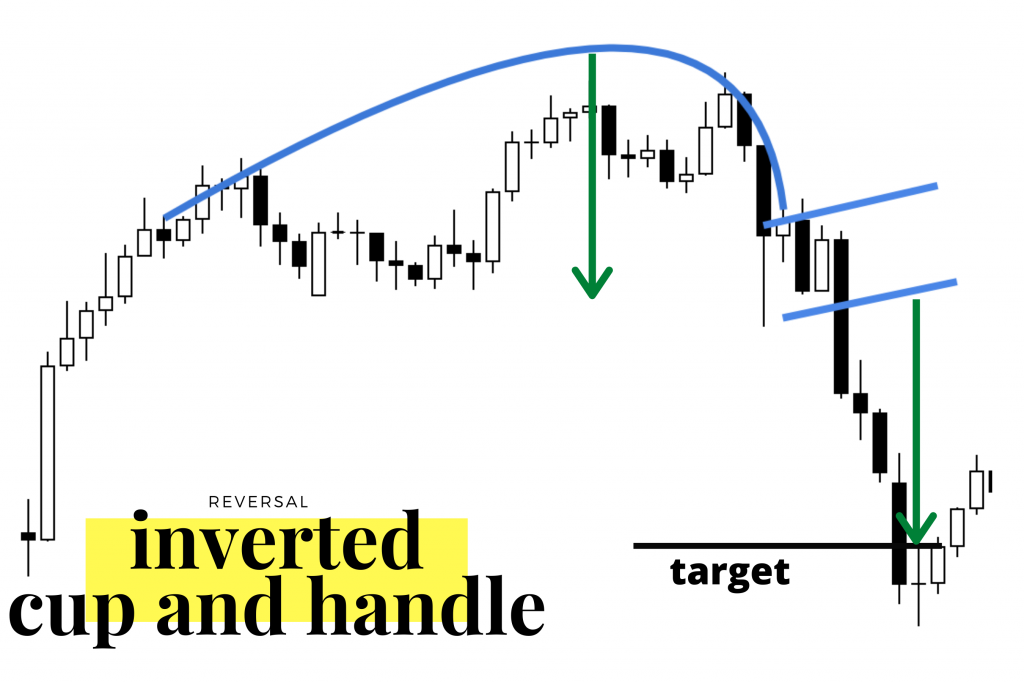 The inverted cup with handle is a reversal pattern and momentum sell short signal as it breaks down out of the ‘handle’ in the formation. It is usually a topping pattern after a strong move to the upside signaling the end of an uptrend on a chart.

An inverted cup and handle chart pattern ideally takes place at the end of bull markets when the stock indexes are near all-time highs in price.

The cup part of the formation is created when profit taking sets in on every attempt to make a new high in price and the market begins to slowly go into a distribution phase instead of rallying to new highs. The inverted cup top is formed when the stock finally runs out of buyers at new high prices and sellers start moving in and bidding the stock down.

Most of the time as the stock emerges out of the right side of the inverted cup and begins to fall it fails to break down and meets support the first time it tries to break out to new lows in price. This is when the pattern forms an inverted handle inside a trading range. The second run at new lows usually works as the majority of buyers have been worked through and the stock breaks down to new lows.

Buyers at new resistance highs near the top were the last buyers of the chart as it failed to break out of the inverted cup pattern because of a lack of buyers at those prices.

The chart then swings down in price as stop losses and trailing stop signals are triggered for exits.

This Exxon Mobile chart below shows an inverted cup pattern from January through May as new highs failed to hold and price went lower after the peak. From June through mid-July an inverted handle formed inside the range of the inverted cup which looks like a vertical ascending price range channel. The breakdown of the lower vertical trend line support signaled a new swing down in price action from the middle of July through August.

Technical analysis is the art and science of reading charts to quantify the trend or trading range price is in, the path of least resistance for the next directional move, the area of value on the chart, and create good risk/reward ratios by defining key technical levels.
TECHNICAL ANALYSIS

Technical analysis can be both an art or a science based on how you use it. It is very easy to become too rigid in its practice believing it can become too flexible whatever you want to see.
ECONOMIC & FINANCE