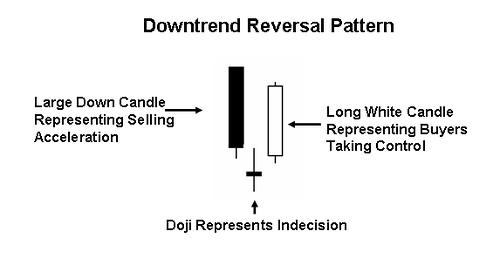 The morning star candlestick pattern is created by three candlesticks that show a bullish reversal from the lows in price. Morning star patterns generally form in price during a downtrend on a chart. It is a signal for a high probability that a low is in and that price is likely to begin to swing higher. It is a reversal pattern that indicates that a chart could be going from a downswing to an upswing in price.

It’s three candle formation consists of a bearish down candle, a small reversal candle off the lows, and finally a bullish candle that opens higher than the middle low candle and closes near its highs of the day.

The opposite of a bullish morning star is a bearish evening star that signals the reversal of an uptrend in price.

The pin bar is a candlestick bar which is a very powerful formation if you use it correctly. You can catch significant market moves as this bar signals to take the trade from the beginning of the trend. We find these ideal pin bars when the market moves sharply and then dries the volatility or loses the strength of its trend.
CANDLESTICKS

Simple Ways to Use Candlestick Patterns

Candlestick Patterns are a type of chart that clearly represents the behavior of buyers and sellers through visual price action patterns. They are a very...
CHART PATTERN

In technical analysis the triple top chart pattern can be a possible signal for a reversal lower in price.
CANDLESTICKS

The doji star is a neutral signal that occurs when a single candle has opening and closing prices that are close to the same.
Load more