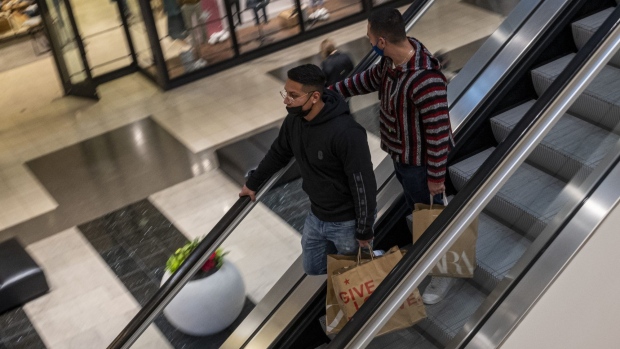 The University of Michigan’s sentiment index dropped to 59.4 from 59.7 earlier in the month, data released Friday showed. The median estimate called for no change in a Bloomberg survey of economists.

A gauge of current conditions decreased to 67.2 from 67.8 earlier in the month. The survey’s measure of future expectations were little changed at the lowest since 2011.

Consumers still expect inflation to rise 5.4% over the next year. They expect prices will increase at an annual rate of 3% over the next five to 10 years, unchanged from February. While still above the Federal Reserve’s target rate, it may offer some comfort to the central bank that long-term expectations remain anchored.

Americans are facing decades-high inflation, prompting the Fed to raise rates for the first time since 2018 last week. Price pressures, which are outpacing wage gains, have only worsened as Russia’s war in Ukraine enters its second month, driving up the cost of staples like food and gasoline.

About a third of consumers expect their overall financial position to worsen in the year ahead, the highest recorded level since the survey began in the mid 1940s, the report said. Furthermore, more consumers mentioned reduced living standards due to rising inflation than any other time except during the recessions seen in the late 1970s and 2008.

Many economists worry about how inflation will affect consumer spending as Americans are left with less discretionary income, with buying attitudes at record lows. That presents a risk to economic growth, and several forecasters have already lowered their expectations. Inflation-adjusted consumer spending data for February will be released next week.

From a political perspective, Republicans report a much higher awareness of inflation. When asked how their finances have recently changed, half of Republicans mention inflation compared to 19% of Democrats.

Some of the benefits of forex signals include better trade results in less time. If you prefer to trade forex online.
ECONOMIC & FINANCE

How To Win the Game Of Trading: 6 Lessons Learned During 30 Years Of Trial And Error

NO INVESTMENT ADVICE PROVIDED Any opinions, chats, messages, news, research, analyses, prices, or other information contained on this Website are provided as general market information for educational and entertainment purposes only, and do not constitute investment advice. The Website should not be relied upon as a substitute for extensive independent market research before making your actual trading decisions. Opinions, market data, recommendations or any other content is subject to change at any time without notice. ULTREOS FOREX, will not accept liability for any loss or damage, including without limitation any loss of profit, which may arise directly or indirectly from use of or reliance on such information. We do not recommend the use of technical analysis as a sole means of trading decisions. We do not recommend making hurried trading decisions. You should always understand that PAST PERFORMANCE IS NOT NECESSARILY INDICATIVE OF FUTURE RESULTS. Copyright © 2020 ULTREOSFOREX.COM